Tripartite Attack on Syria – Another Stepchild of 9/11 The April 14th attack by the United States, Britain and France against the sovereign state of Syria is another troubling incident stemming from the failure of a mainstream media that has not been called to account for their failure to expose the true facts about 9/11. This attack can only have occurred in an environment in which decisions are made based on the ability to control the media – not the facts. One year ago in April 2017, the United States launched 59 cruise missiles in response to an alleged use of chemical weapons by the Syrian military. This latest attack launched twice as many cruise missiles as a year ago.

This current example of misinformation, orchestrated by the government and mainstream media, is only possible because of the failure to hold the U.S. government and it's allies to account for 9/11. Continuing failure to hold the U.S. Government to account for 9/11 can only mean that the poor people of counties like Syria, Yemen, Iraq, Afghanistan, Pakistan and Libya, and will continue to suffer, even though they pose no threat to the United States.

Basis for the Attack

The reason for the attack, as trumpeted through the media, was that the Assad government had used chemical weapons against its citizens on April 7th in the city of Douma. Immediately after the incident before any investigation could be carried out,  the US and its allies accused the Assad government of being behind the alleged attack and started drawing up plans for a military action.

The US has brazenly declared that they have proof that the Syrian government, under the direction of Bashar al-Assad, conducted a chemical attack on the town of Douma, ten kilometers out of Damascaus, and that they have a "very high confidence" in their "evidence". Moreover, Russia is "part of the problem" because of its "failure to stop them", and their "continued distraction on this front" exacerbates the issue, according to White House Press Secretary Sarah Huckabee Sanders. Additionally, the State Department's spokesman Heather Nauert is issuing the declaration that "the Syrian government was behind the attack" at a press briefing.

However, none of the tripartite attackers has provided any evidence to support such a claim. Colin Powell falsely stated that Iraq possessed the means to disperse anthrax from planes ahead of the 2003 war in Iraq.

The launching of a military attack based on no evidence – of fabricated evidence – is reminiscent of Colin Powell’s February 2003 statement to the United Nations that Iraq had weaponized anthrax. He held up  vial of white power (not real anthrax) with his line that a teaspoon will kill you and Iraq has truckloads. According to Graeme MacQueen, this staged presentation was believed by almost all Americans and by almost nobody abroad. He falsely stated that Iraq possessed the means to disperse anthrax from planes.

Use of Chemical Weapons Claim

On April 12th, US Defense Secretary James Mattis officially said that, “I believe there was a chemical attack, and we're looking for the actual evidence. The OPCW, the organization chartered by the Prohibition of Chemical Weapons convention, we're trying to get those inspectors in -- if we get them in -- if the regime will let them in. We will not know who did it, they can only say that they found evidence or did not.”

On Friday, April 13, the OPCW inspection team arrived in Syria and was to begin their investigation in Douma on Saturday – the day of the attack. According to Syrian Ambassador to the United Nations Bashar Al-Jaafari, Syria had provided “full facilitation” to the OPCW team to conduct its probe in a transparent manner.

However, in the information vacuum called the mainstream media, the OPCW’s presence in Syria is buried and prominence is given to the unsubstantiated claims of the tripartite governments. For those who have struggled against the mainstream media to expose the truth of 9/11, this scenario is all too familiar.

Dissent Appears in the UK

"Bombs won’t save lives or bring about peace."

Jeremy Corbyn has described air strikes in Syria by US, British and French forces as a "legally questionable action." The Labour leader condemned the attack aimed at reducing the Syrian government's chemical weapons capabilities, claiming it would make real accountability for war crimes less likely. Mr Corbyn said Prime Minister Theresa May should have sought parliamentary approval for Britain’s participation in the strikes, rather than "trailing" after U.S. President, Donald Trump.

"Bombs won’t save lives or bring about peace."

This legally questionable action risks escalating further, as US defense secretary James Mattis has admitted, an already devastating conflict and therefore makes real accountability for war crimes and use of chemical weapons less, not more likely.

Organization for the Prohibition of Chemical Weapons (OPCW)

Based on past events, the OPCW will be strongly encouraged by Washington to determine that chemical weapons were used, not, if they were, or by whom. If the OPCW can be pressured to say evidence of chemical weapons use was found, Washington will seize on that as proof that Syria did it.

Jose Bustani, a Brazilian diplomat who was Director-General of the OPCW, has made it clear that the organization is not independent of Washington’s control. It is supposed to be independent, but is not.  Reports from 2002 state that he was ordered to resign by John Bolton, the dangerous neoconservative warmonger who is currently National Security Adviser to President Trump. Bustani pointed out to Bolton that he was appointed by the OPCW member states, not by the US, and refused to resign. Here is Bolton’s reply: “OK, so there will be retaliation. Prepare to accept the consequences. We know where your kids are.”  As reported, this is Bolton's diplomacy at work.

Eventually, Bolton had Bustani removed by a vote of 48-7 with 43 abstentions.  The observation at the time was that members of the OPCW preferred their Washington subsidies to being an honest organization – the march to war against Iraq and, later, Libya could then continue unimpeded. Defense Secretary Mattis and Marine Corps Gen. Joe Dunford, chairman of the Joint Chiefs of Staff, briefed reporters on the attack on Syria during a joint news conference at the Pentagon on Friday, April 13, 2018. General Dunford listed the targets as:

According to the Pentagon, the tripartite attack launched 105 missiles at the alleged “chemical weapons” facilities of the Assad government.

According to the Pentagon, the Syrian Air Defense did not intercept a single missile.

According to Syrian and Russian sources, over 70 of the 100+ cruise missiles were intercepted by Air Defense systems.

However, according to the Russian Defense Ministry, 103 cruise missiles / smart bombs were dispatched in the attack.  The attack consisted of seaborne Tomahawks, GBU-38 guided bombs from B-1B planes, air-to-surface missiles from F-15 and F-16 fighter jets, while the UK Air Force’s Tornado aircraft fired eight Scalp EG air-launched cruise missiles. According to Syrian and Russian sources, over 70 of the 100+ cruise missiles were intercepted by Air Defense systems. The attack was aimed at the following targets:

The Opportunity to Expose the Media

One of the opportunities that arise from this blatant misrepresentation of the facts is to use it to trace its roots back to the events of 9/11 that the mainstream media has consistently misrepresented.

On April 15, a march will be held to oppose the military buildup and focus on human needs: End the Wars at Home and Abroad!

This would be an appropriate time to remind everyone at these events – including the anti-war leadership – that silence about 9/11 enables the government / media deceptions.

@911TAP9/11 TAP
But those that recover from Covid will be fully immune. https://t.co/PHPKPUJ3sK

@RayMcGinnis7Ray McGinnis
9/11 Family Steering Committee asked 9/11 Commission to ask Mayor Giuliani “After the 1993 bombing of the WTC, what… https://t.co/DYX0vBMeuf

@KevinRyan911Kevin Ryan
The one thing that the Covid vaccinated and the unvaccinated share is that neither will ever be fully vaccinated. https://t.co/ImToQexqLs 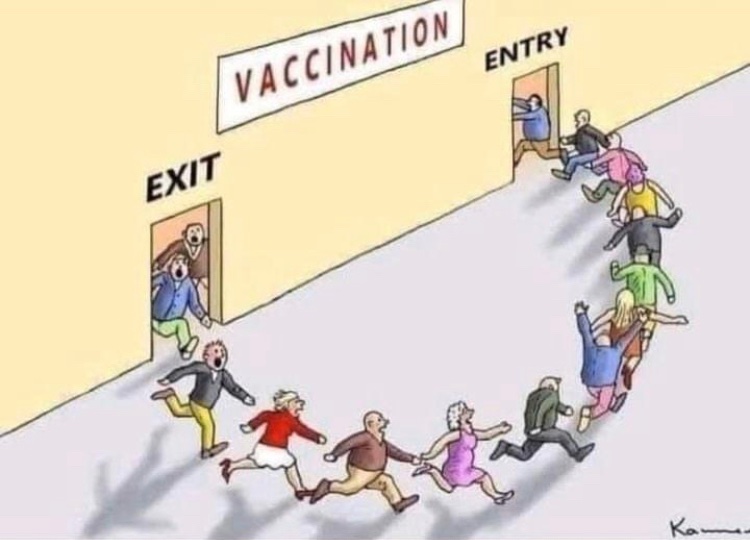 @KevinRyan911Kevin Ryan
Australia is locking its citizens up in concentration camps as part of the new Covid fascism. What will you do when… https://t.co/yIpirIl0GZ

@PiersRobinson1Piers Robinson
Important address in Italy today by @RobertKennedyJr on the need to now push back against the Covid deception and t… https://t.co/qyR6IyIiQO

@KevinRyan911Kevin Ryan
I’m thankful for all the people who have learned from history and actual science and therefore haven’t fallen for the Covid scam.

@KevinRyan911Kevin Ryan
The Covid scare has gone entirely against medical science and continues to be a huge crime against humanity. https://t.co/8DNMznu6mj

@DEAcampaignDon't Extradite Assange
“The other side? A super power that has been preparing for 9 years, with hundreds of people and untold millions spe… https://t.co/QbiJVgpCj7

@RayMcGinnis7Ray McGinnis
Thanks to authors Lisa Pease and Kevin Ryan for their endorsements of my book, Unanswered Questions: https://t.co/UUu9m8nlcz 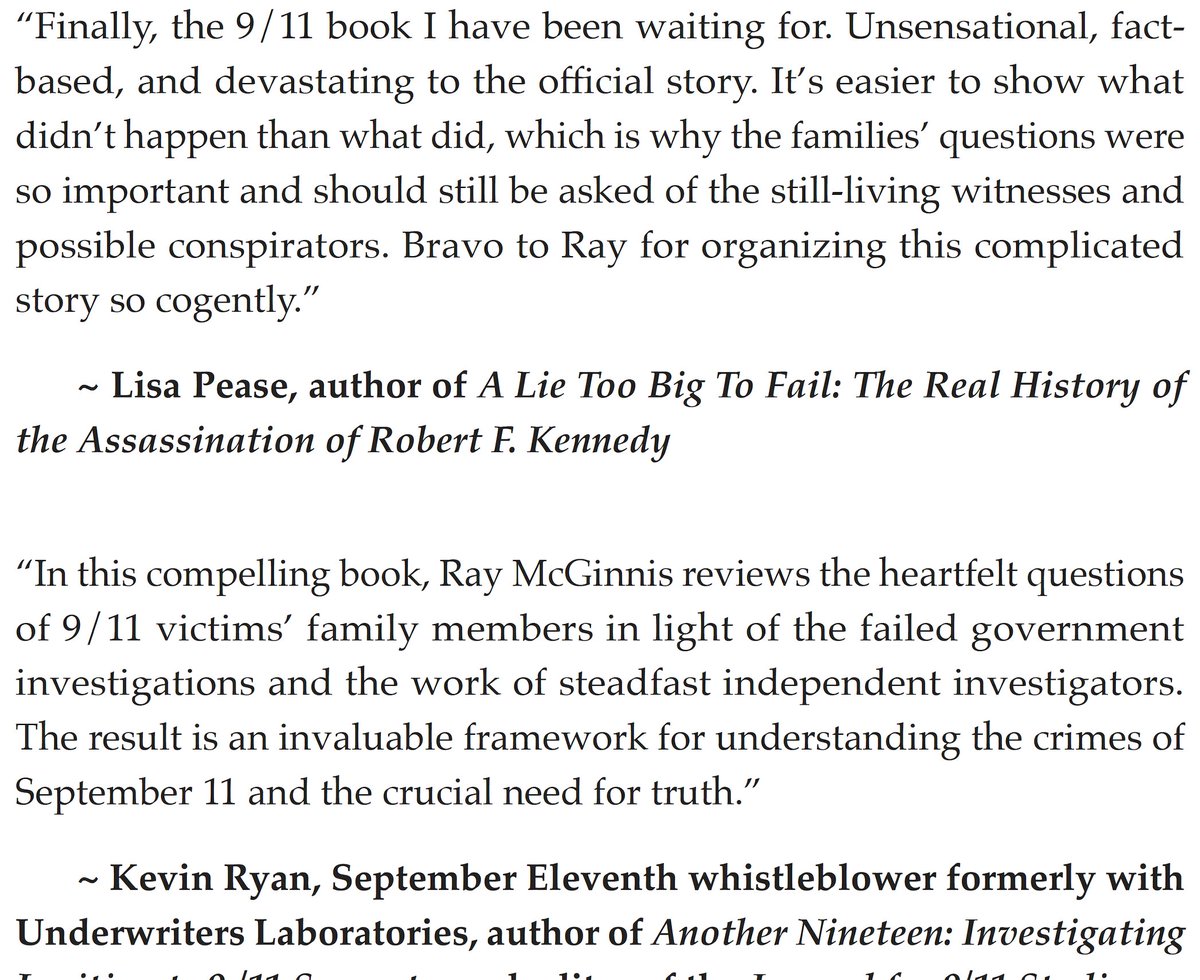 @LanceCiepielaLance Ciepiela
In this 20th Year Anniversary of 9/11 the President and Congress should review the evidence of Federal Crimes repor… https://t.co/N8GvLNWnNE